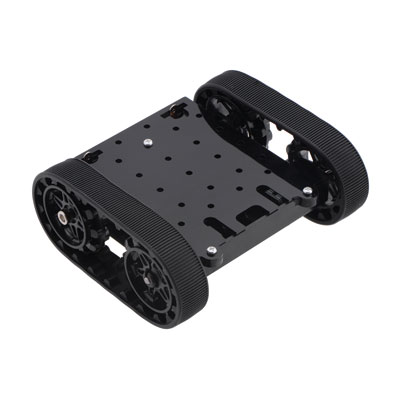 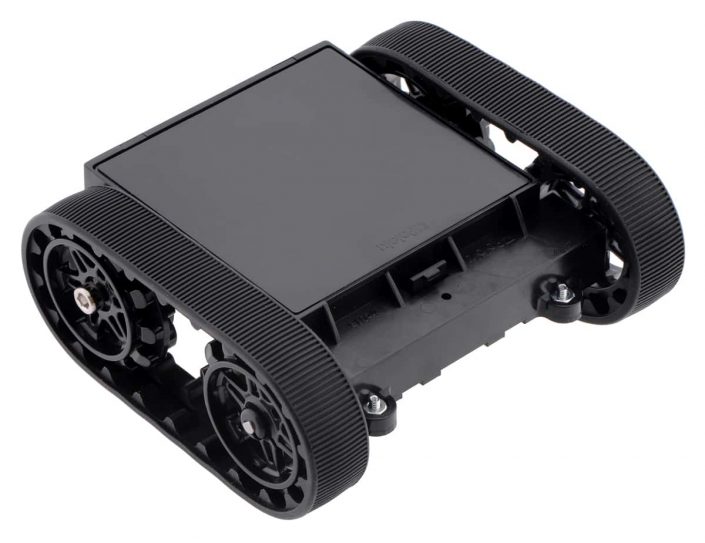 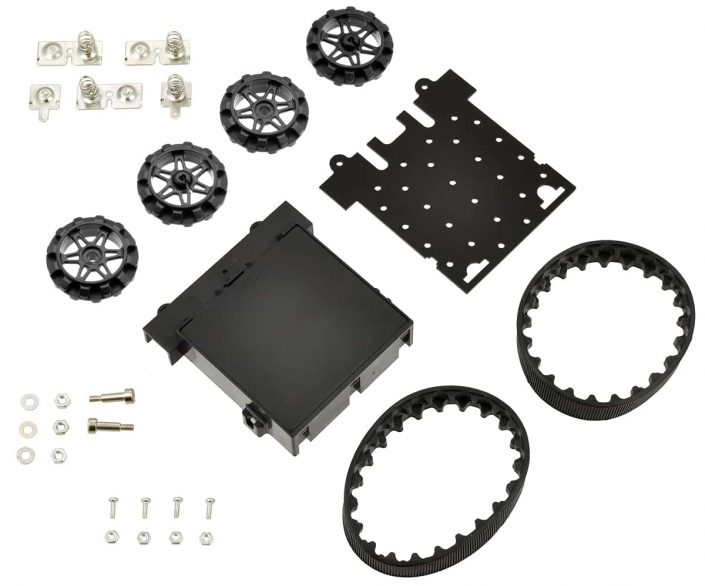 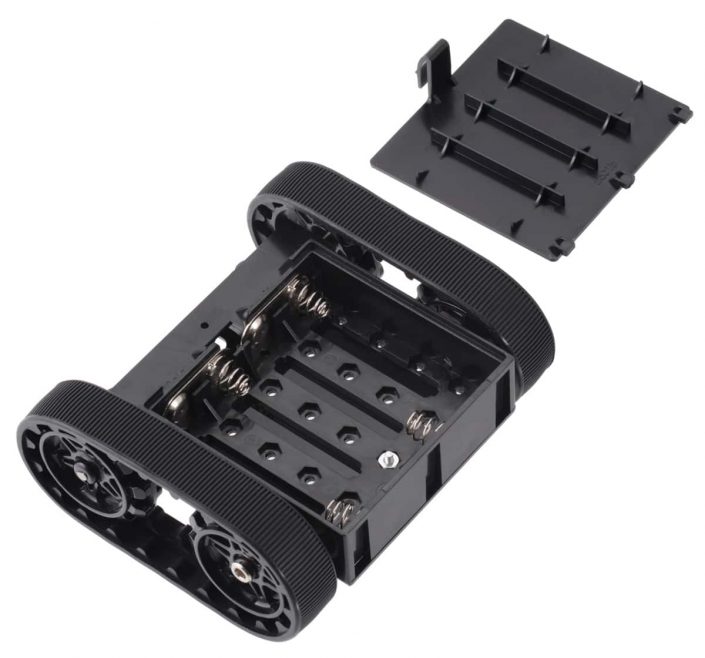 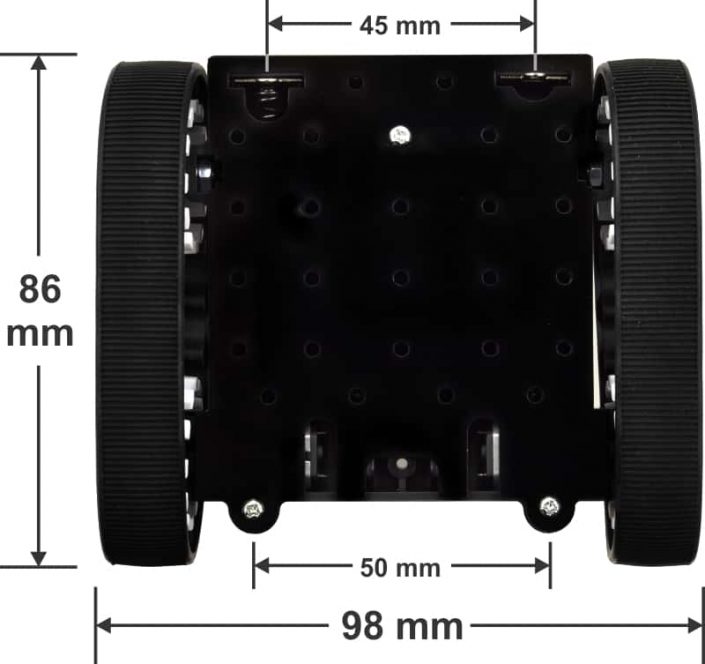 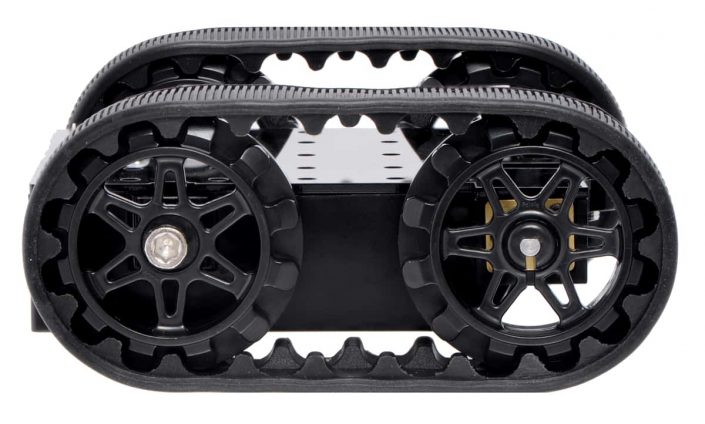 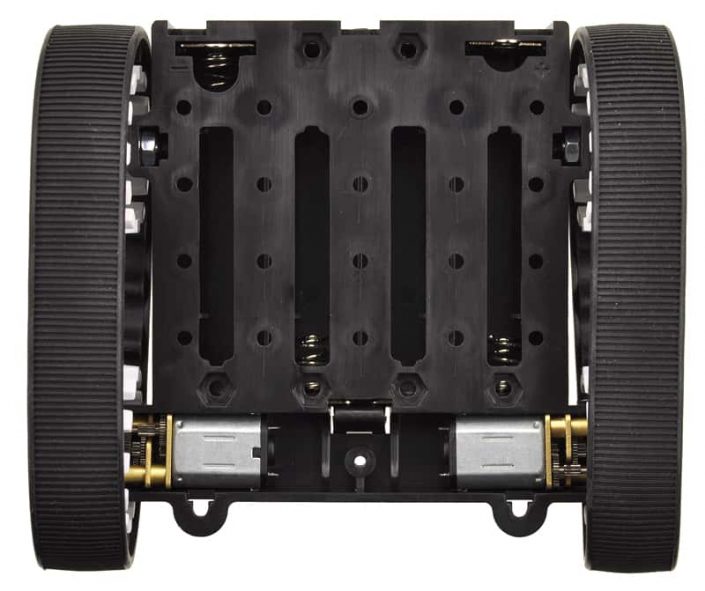 The Pololu Zumo chassis is a small, tracked robot platform that is less than 10 cm on each side, allowing it to qualify for Mini Sumo competitions. The chassis is composed of black ABS and features a compartment for four AA batteries and sockets for two micro metal gearmotors. It ships as a kit with two silicone tracks, two drive and two idler sprockets, a 1/16″ acrylic mounting plate, and mounting hardware. (Motors and batteries are not included.)

1  – With motors and batteries; weighs 3.0 oz as shipped, without motors or batteries.

The Zumo chassis kit contains the components necessary to build a small, high-performance tracked robot platform that is compact enough to qualify for Mini Sumo competitions. The chassis is made from black ABS plastic and has sockets for two micro metal gearmotors and a compartment for four AA batteries (motors and batteries are not included). The battery compartment terminals protrude through the chassis and can be accessed from the top side. A black acrylic plate is included with the chassis. This plate holds the motors in place and can be used for mounting your electronics, such as your microcontroller, motor drivers, and sensors.

The drive system consists of two black silicone tracks, one on each side, that are each supported by a freely spinning idler sprocket and a motor-driven drive sprocket (see the Motors section below for more information on how to select appropriate motors for your robot). These tracks are also available separately in two different lengths and three different sprocket colors.

Assembly instructions are available in the user’s guide under the resources tab.

As of July 2015, this kit is shipping with black, spoked sprockets (see the main product picture and the kit component picture above). Some of the other pictures on this page still show the original white sprockets.

The Zumo chassis uses two motors, one for each tread. The ideal motors for your robot depend on your desired torque, speed, and current draw, so motors are not included with the chassis. We generally recommend using high-power (HP or HPCB, which have long-life carbon brushes) versions of our micro metal gearmotors since the tracks require a decent amount of torque to move effectively; higher gear ratios of the non-HP motors might work if you want lower current draw, but they will be slower and offer less control. Specifically, we primarily recommend the 50:1, 75:1, or 100:1 HP or HPCB motors for use with this chassis. The following table summarizes the key specifications of these three gearmotors. The first four columns are specifications of the motors themselves, while the last column is the measured top speed of a Zumo chassis loaded to a weight of 500 g and driven with these motors. Note that the specifications are for 6V operation, which is approximately the voltage you would get with four alkaline batteries; four NiMH AA cells will typically provide less than 5V.

You can add your own motor drivers, sensors, and programmable controllers to this chassis, or you can get one of our more complete Zumo robots, which include electronics designed specifically for the Zumo chassis.

The Zumo Robot for Arduino combines a Zumo chassis with a Zumo shield, which includes a dual motor driver, buzzer, and three-axis accelerometer and compass, giving you all the basic mechanical parts and electronics to build an Arduino-controllable robot (Arduino not included). The newer Zumo 32U4 Robot is a more highly integrated robot also based on the Zumo chassis that includes an Arduino-compatible ATmega32U4 microcontroller and even more sensors (quadrature encoders and a proximity sensor system).

If your goal is to make a robot based around a controller other than an Arduino, we recommend the DRV8833 motor driver carrier or qik 2s9v1 for use with this chassis.

This chassis works with four AA batteries. We recommend using rechargeable AA NiMH cells, which results in a nominal voltage of 4.8 V (1.2 V per cell). When the batteries are fully charged, they will be well above 5 V, and when they are almost spent, they will be well below 5 V. As such, you might consider using a step-up/step-down voltage regulator to power your logic, since this will hold your logic voltage steady at 5 V, no matter if your battery voltage is above or below 5 V. You can also use alkaline cells, which would nominally give you 6V, but that voltage would drop depending on the load.

We carry a basic stainless steel sumo blade that can be mounted to front of the Zumo chassis. With this blade, the Zumo chassis can push around objects, such as other MiniSumo robots. You can also use the design file for this basic blade as the starting point for a custom sumo blade.

The Zumo chassis includes the black sprockets shown in the left picture below, but we also have sprockets available in in red and white that can be purchased separately if you want to add a bit of personalization to your chassis. Note that the white sprockets are white versions of the new, spoked style, not the older style still visible in some of the other pictures on this page that show white sprockets. 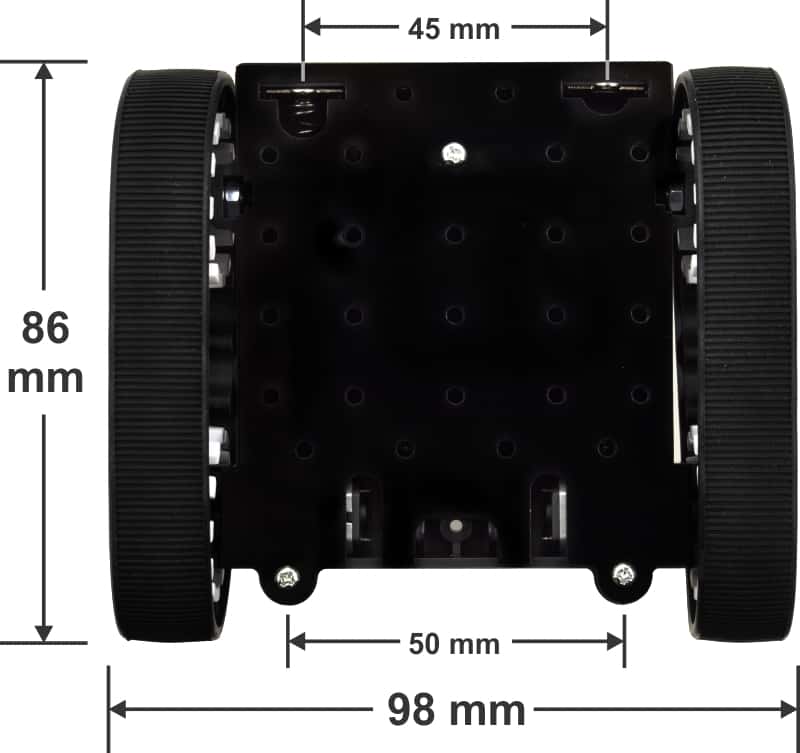 Since each side is smaller than 10 cm, this chassis meets Mini-Sumo size requirements. The front screws used to mount the acrylic plate to the chassis can also be used to mount a front scoop that can extend up to 14 mm before exceeding the Mini Sumo limits. The assembled Zumo chassis weighs approximately 210 g with motors and batteries.

Example robot based on the Pololu Zumo chassis next to a Parallax SumoBot. 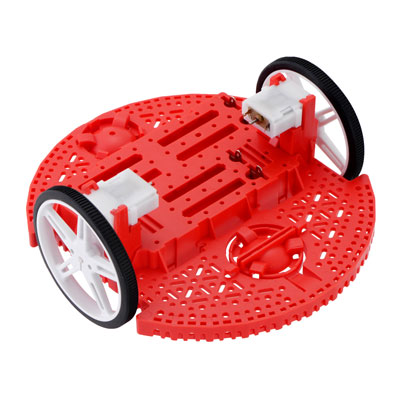 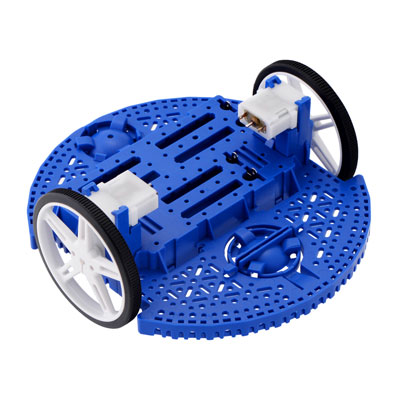