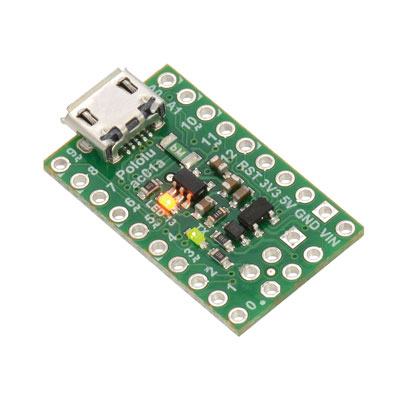 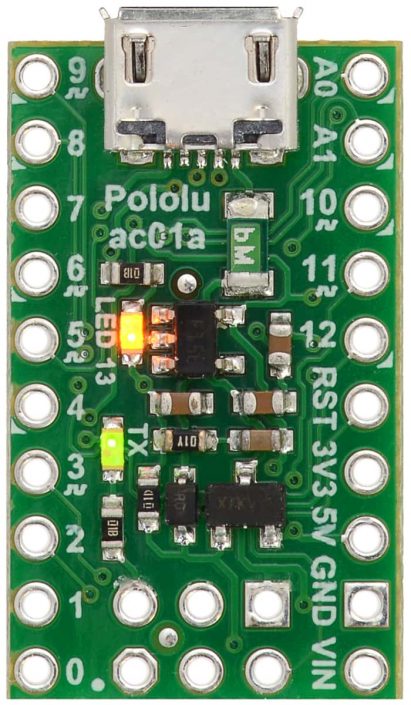 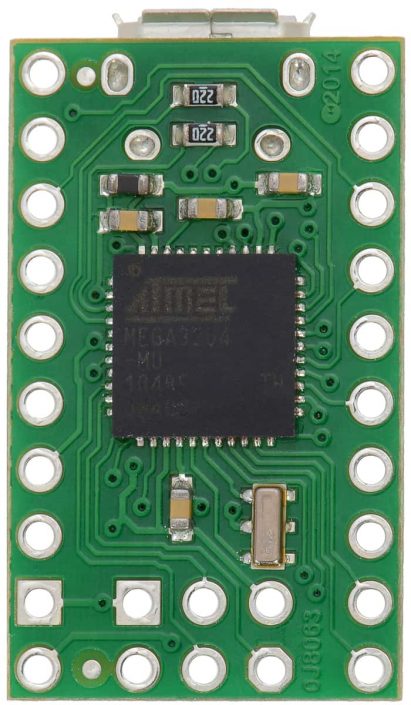 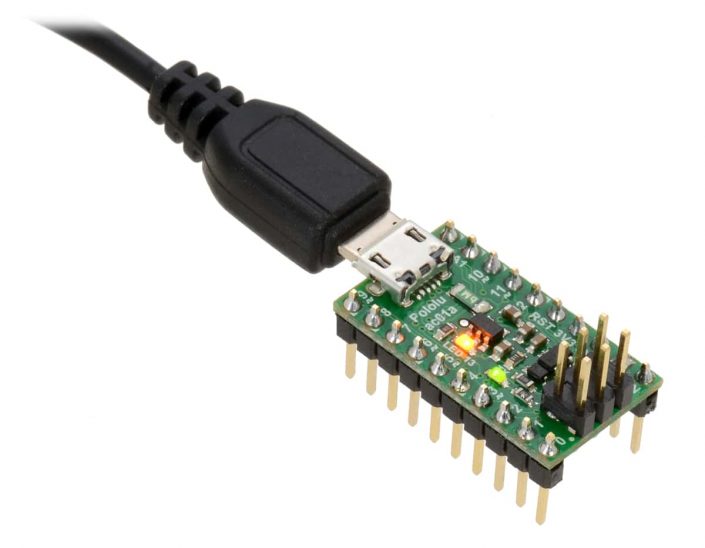 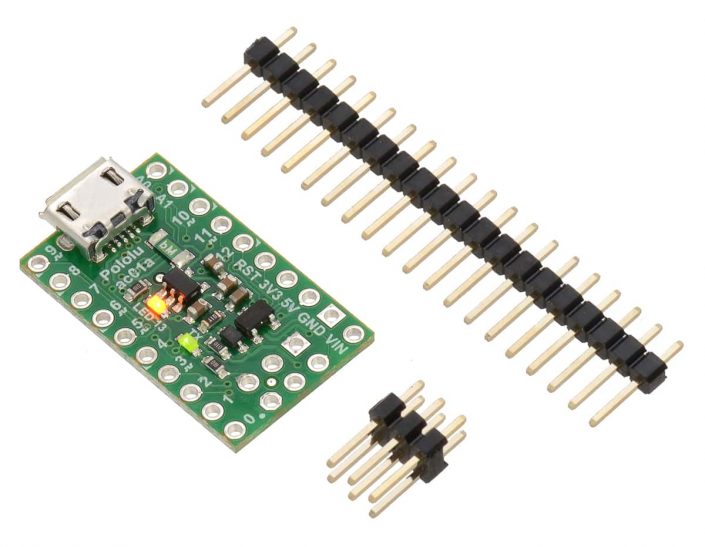 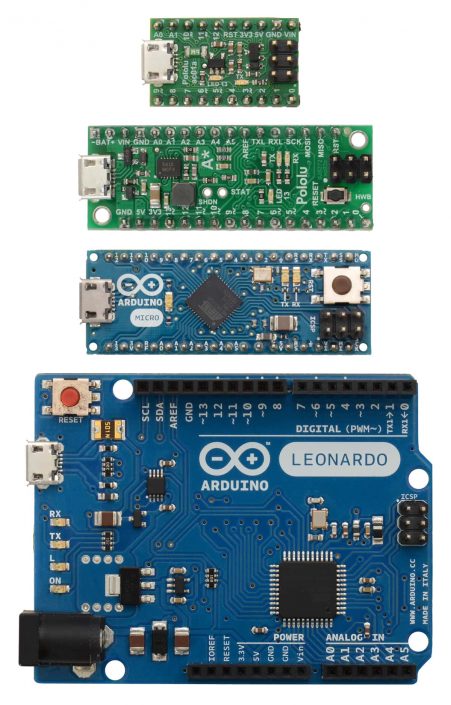 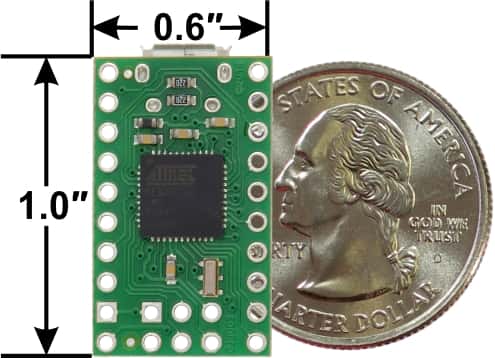 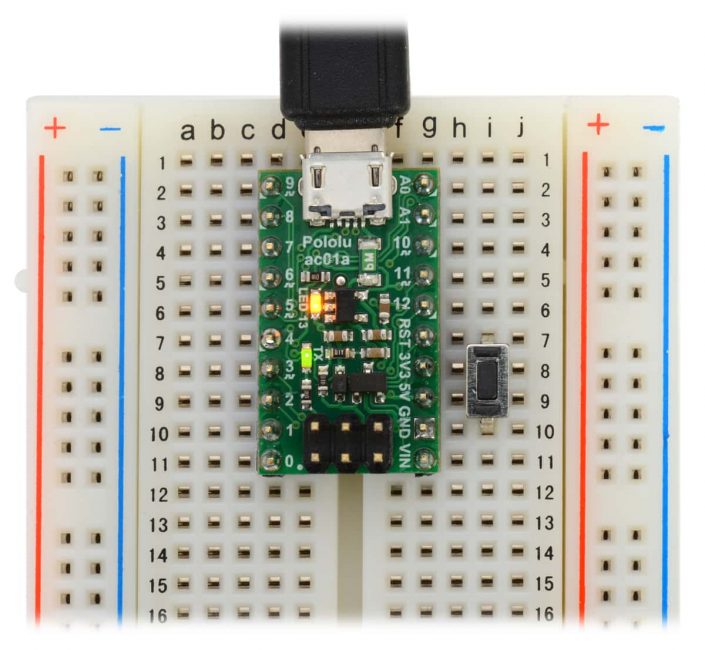 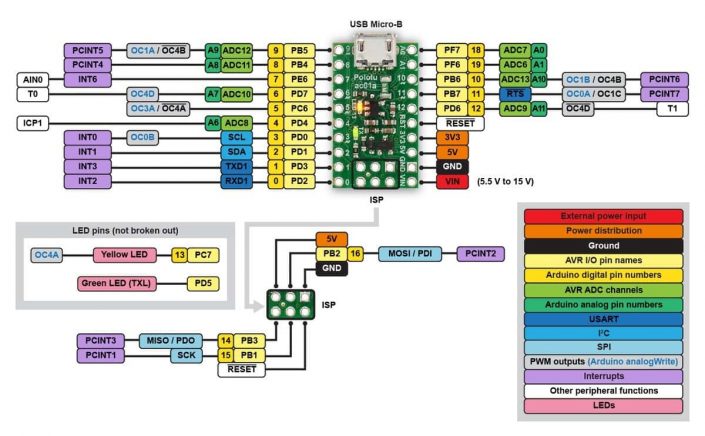 The A-Star 32U4 Micro is a tiny programmable module featuring the ATmega32U4 AVR microcontroller. It packs a Micro-USB interface and 18 digital input/output pins (of which 7 can be used as PWM outputs and 8 as analog inputs) onto a board measuring only 1″ × 0.6″ and ships preloaded with an Arduino-compatible bootloader.

The Pololu A-Star 32U4 Micro is a general-purpose programmable module based on the ATmega32U4 AVR microcontroller from Microchip (formerly Atmel), which has 32 KB of flash program memory, 2.5 KB of RAM, and built-in USB functionality. Onboard features of the A-Star (abbreviated A*) include a 16 MHz resonator, a USB Micro-B connector, an in-system programming (ISP) header, and a pair of indicator LEDs. A voltage regulator and power selection circuit allow the board to be powered from either USB or an external 5.5 V to 15 V source, while a resettable PTC fuse on the USB VBUS supply and reverse protection on VIN help protect it from accidental damage.

The A-Star 32U4 Micro breaks out 15 general-purpose I/O lines along two rows of pins, including 7 usable as PWM outputs and 8 usable as analog inputs; another three GPIO pins can be accessed through the 6-pin ISP header. It fits all this into a 20-pin dual in-line package (DIP) measuring only 1″ × 0.6″ (even smaller than competing ATmega32U4 boards like the Teensy 2.0 and Pro Micro), and its 0.1″ pin spacing makes the A* easy to use with solderless breadboards, perfboards, and 0.1″-pitch connectors.

Our comprehensive user’s guide provides the basics you need to get started with the A-Star as well as detailed technical information for advanced users.

The A-Star 32U4 ships with a preloaded Arduino-compatible bootloader (which uses 4 KB of flash memory, leaving 28 KB available for the user program). We provide a software add-on that enables the board to be easily programmed from the Arduino environment.

The A-Star 32U4 uses the same microcontroller as the Arduino Leonardo and Arduino Micro and runs at the same frequency, making it just as powerful. Although the larger boards offer a few more I/O pins, the A-Star 32U4 Micro fits in an area half that of the Arduino Micro, and it takes up only 11% as much area as a standard full-size Arduino! 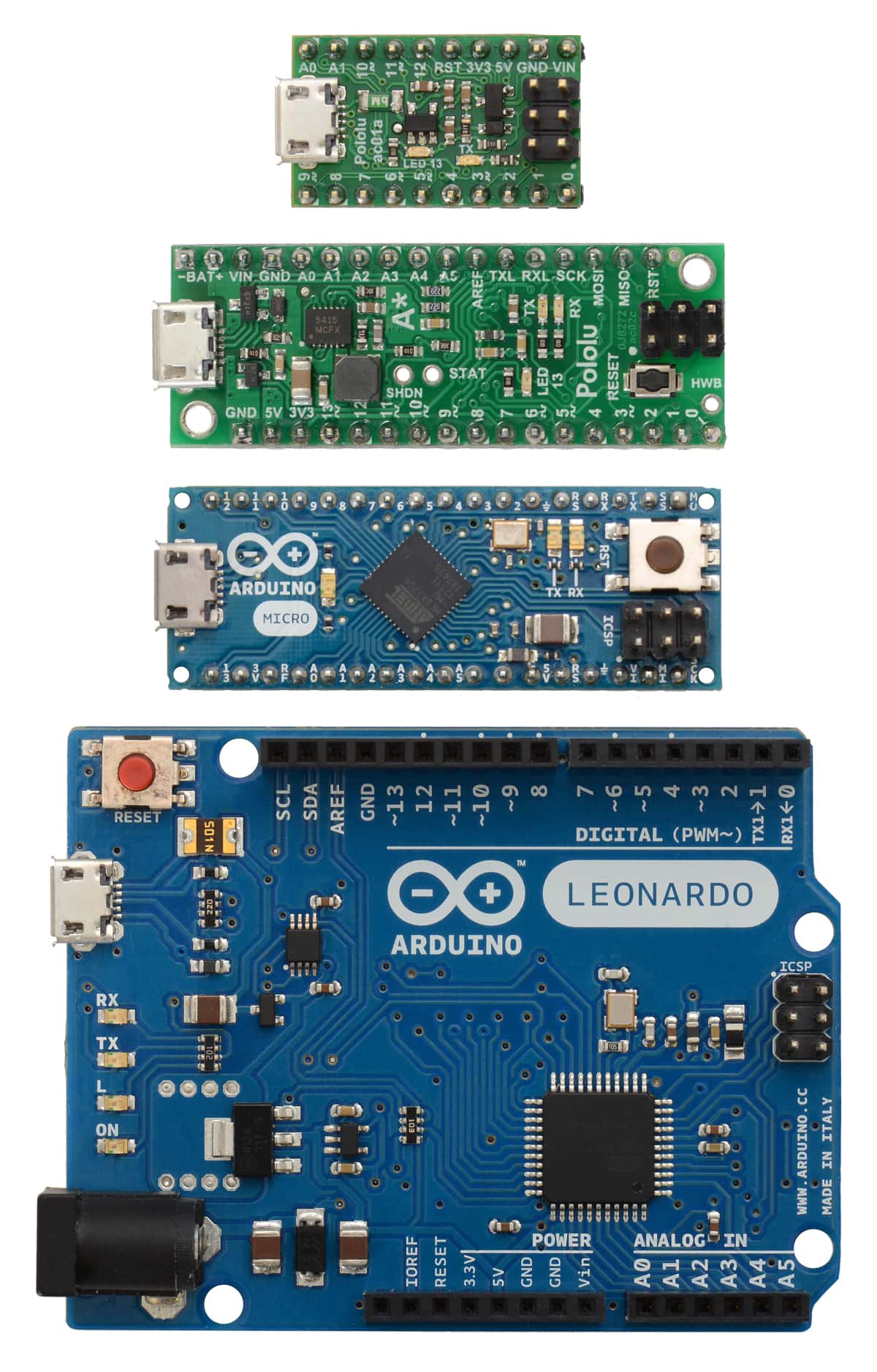 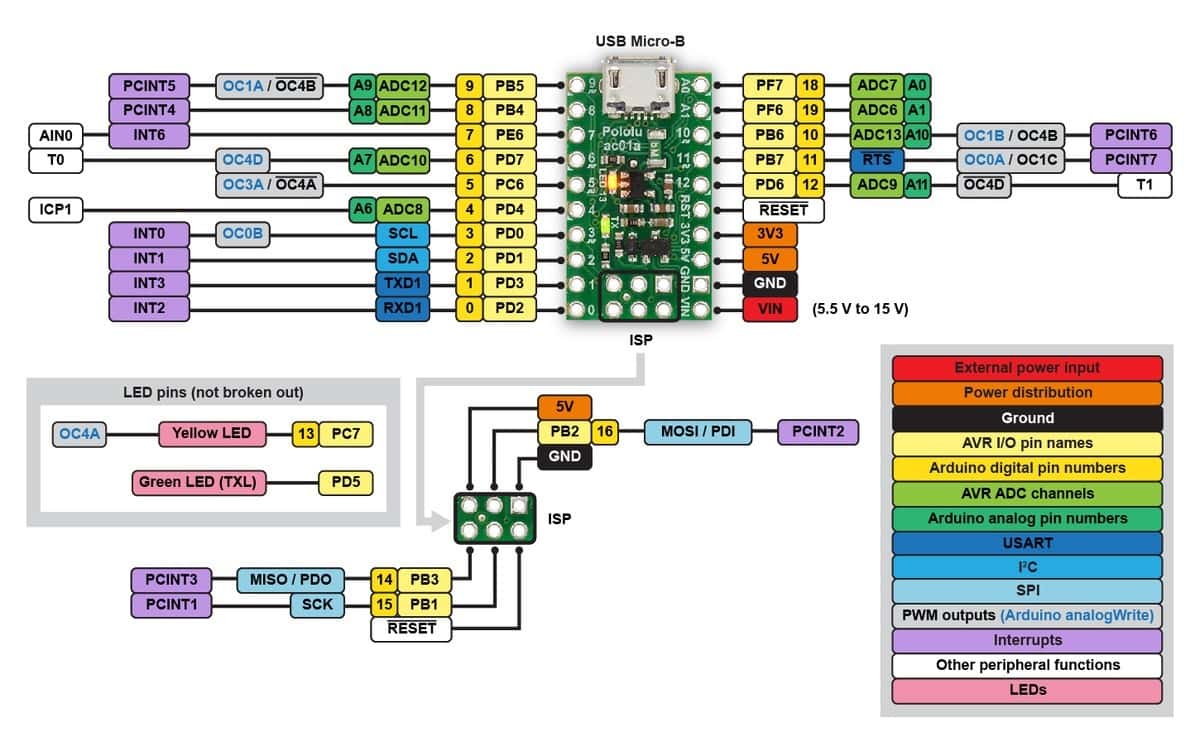 The board can either be powered directly from the USB 5 V supply or from a separate 5.5 V to 15 V source on the VIN pin, which is reduced to 5 V by a 100 mA low-dropout (LDO) regulator; you can access this 5 V supply through the 5V power output pin. Additionally, the ATmega32U4 contains an internal 3.3 V regulator whose output is available on the 3V3 pin. Current drawn from the 3V3 output should not exceed about 50 mA, and when the board is being powered through VIN, the sum of the 5V output current, 3V3 output current, GPIO output current, and current used by the board itself (typically about 25 mA) should not exceed 100 mA.

A 1×20-pin breakaway 0.1″ male header is included with the A-Star 32U4 Micro, which can be soldered in to use the board with perfboards, breadboards, or 0.1″ female connectors. (The headers might ship already separated into two 1×10 pieces.) Also included is a 2×3 header that can be installed to allow external programming of the microcontroller through the AVR ISP interface, such as with our USB AVR programmer. 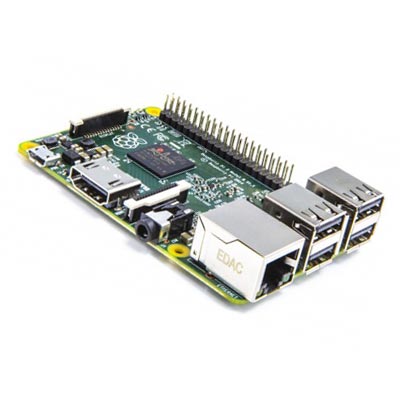 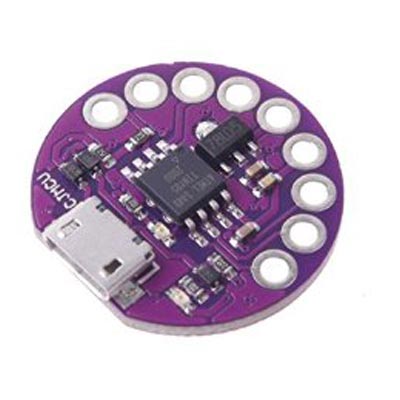 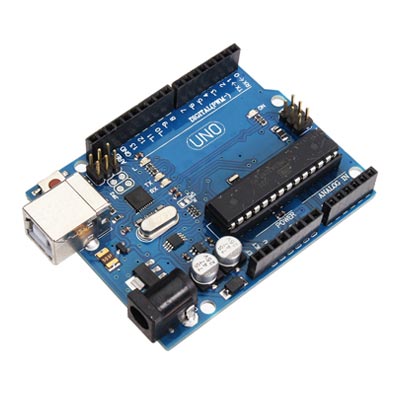 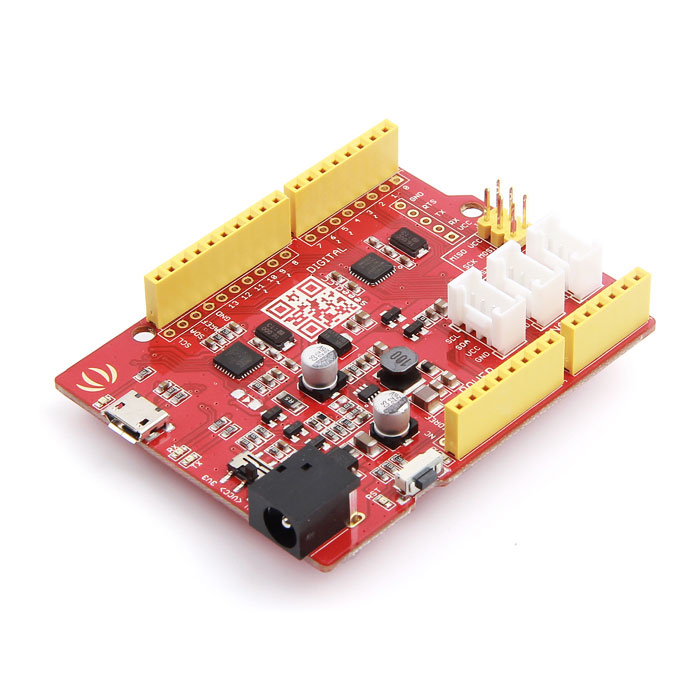 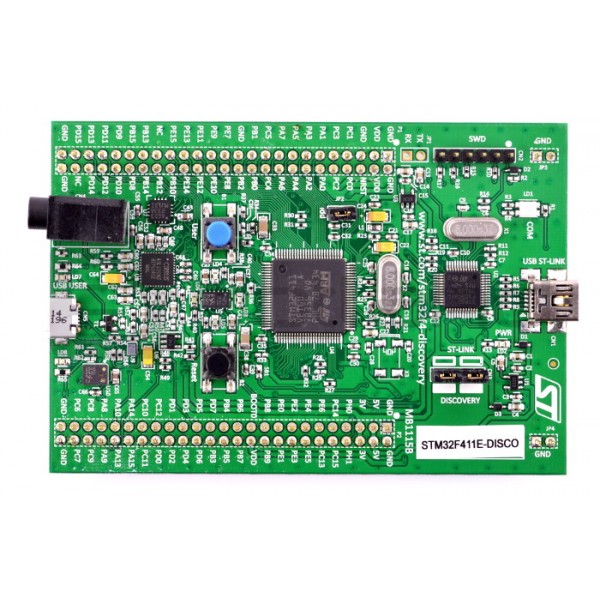