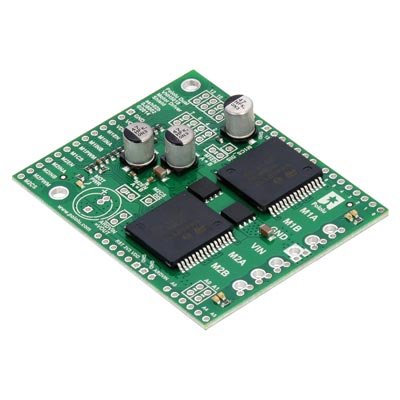 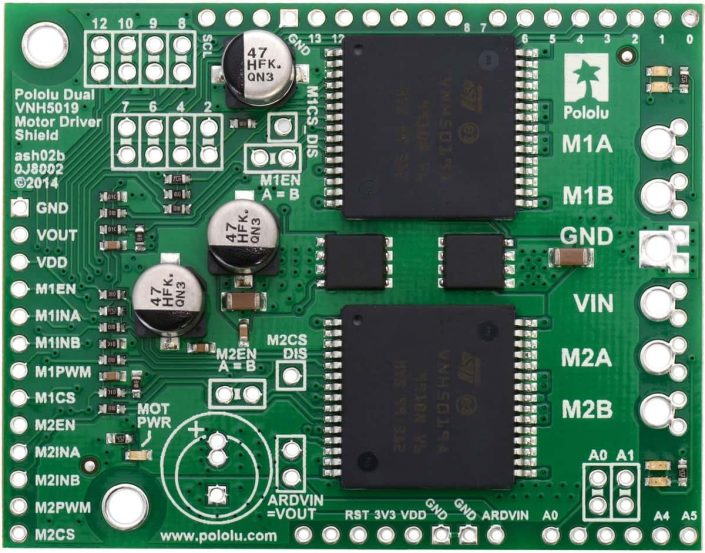 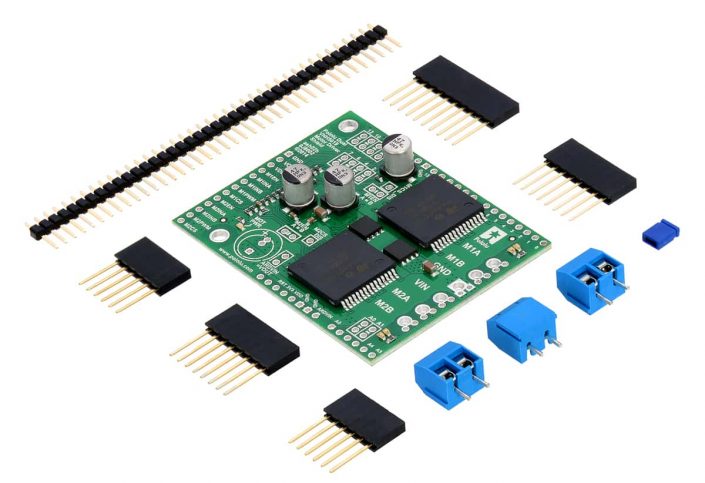 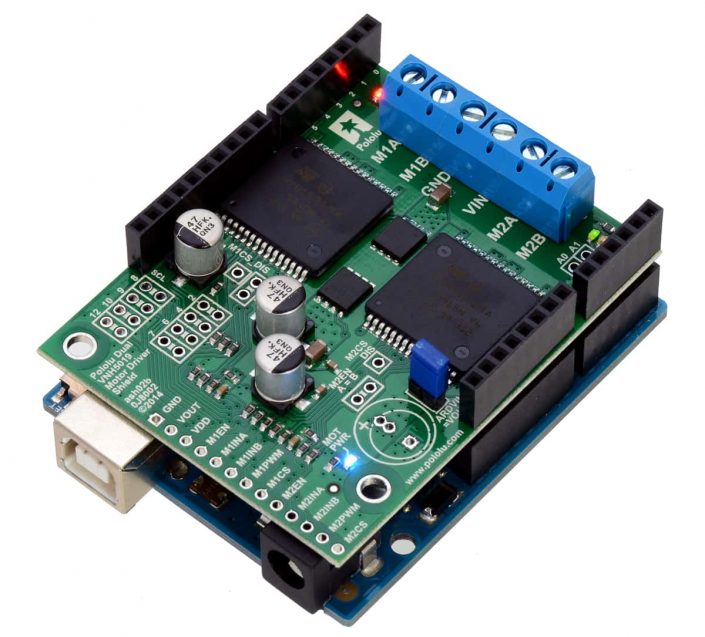 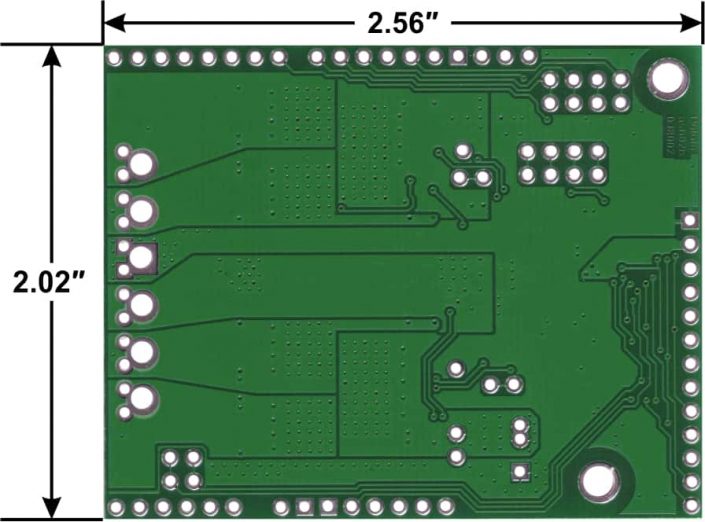 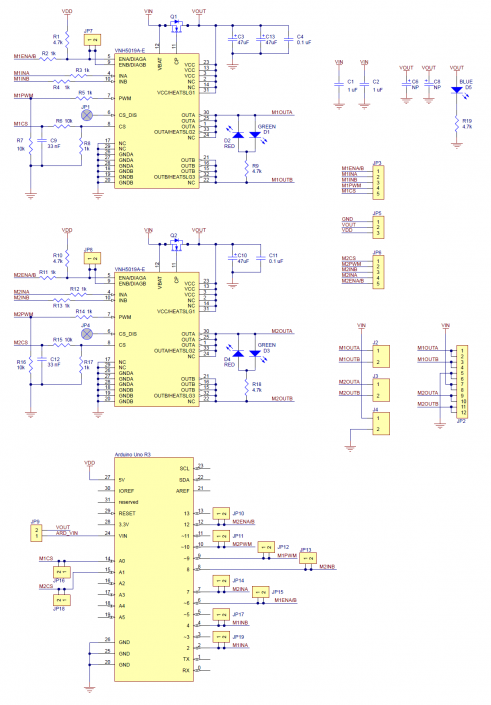 Get your Arduino moving! This shield makes it easy to control two high-power DC motors with your Arduino or Arduino-compatible board. Its dual robust VNH5019 motor drivers operate from 5.5 to 24 V and can deliver a continuous 12 A (30 A peak) per motor, or a continuous 24 A (60 A peak) to a single motor connected to both channels. These great drivers also offer current-sense feedback and accept ultrasonic PWM frequencies for quieter operation. The Arduino pin mappings can all be customized if the defaults are not convenient, and the motor driver control lines are broken out along the left side of the shield for general-purpose use without an Arduino.

This motor driver shield and its corresponding Arduino library make it easy to control two bidirectional, high-power, brushed DC motors with an Arduino or compatible board, such as the A-Star 32U4 Prime. The board features a pair of robust VNH5019 motor drivers from ST, which operate from 5.5 to 24 V and can deliver a continuous 12 A (30 A peak) per channel, and incorporates most of the components of the typical application diagram on page 14 of the VNH5019 datasheet (475k pdf), including pull-up and protection resistors and FETs for reverse battery protection. It ships fully populated with its SMD components, including the two VNH5019 ICs, as shown in the picture to the right; stackable Arduino headers and terminal blocks for connecting motors and motor power are included but are not soldered in (see the Included Hardware section below).

This versatile motor driver is intended for a wide range of users, from beginners who just want a plug-and-play motor control solution for their Arduinos (and are okay with a little soldering) to experts who want to directly interface with ST’s great motor driver ICs. The Arduino pin mappings can all be customized if the defaults are not convenient, and the VNH5019 control lines are broken out along the left side of the board for general-purpose use without an Arduino (see the right connection diagram below). This versatility, along with an option to power the Arduino directly from the shield, sets this board apart from similar competing motor shields. 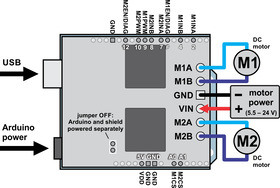 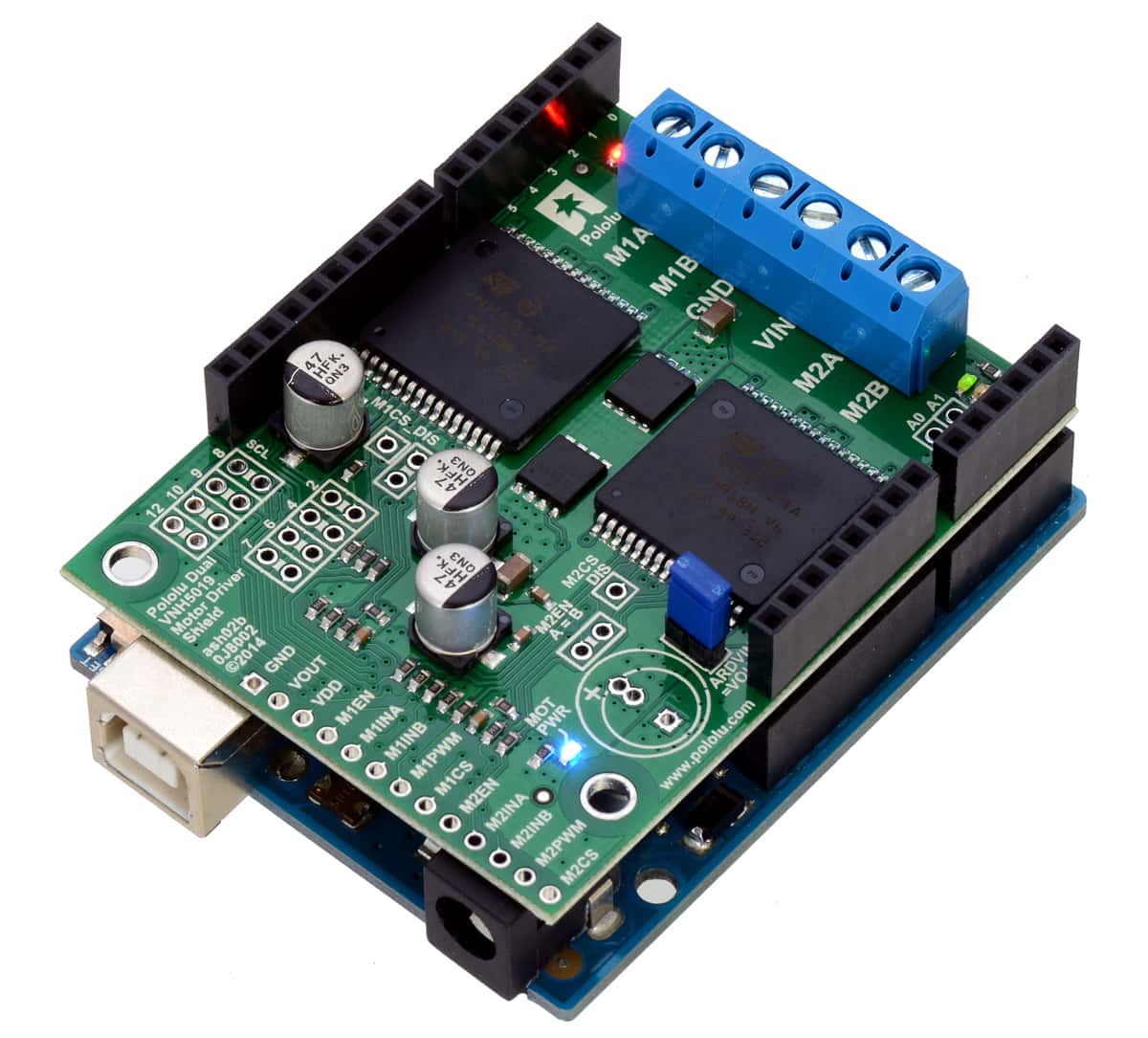 1 – While the overvoltage protection typically kicks in at 27 V, it can trigger at voltages as low as 24 V, so we do not recommend using this motor driver with 24 V batteries, which significantly exceed 24 V when fully charged. If the shield is configured to power an Arduino or Arduino clone, the supply voltage must conform to that Arduino’s input voltage requirements.

A 0.1″ shorting block (for optionally supplying shield power to Arduino) is also included.

You can solder the terminal blocks to the six large through-holes to make your motor and motor power connections, or you can break off a 12×1 section of the 0.1″ header strip and solder it into the smaller through-holes that border these larger holes. Note, however, that the terminal blocks are only rated for 16 A, and each header pin pair is only rated for a combined 6 A, so for higher-power applications, thick wires should be soldered directly to the board.

When not using this board as an Arduino shield, you can solder the 0.1″ headers to the logic connections along the left side of the board to enable use with custom cables or solderless breadboards, or you can solder wires directly to the board for more compact installations. Note that motor and motor power connections should not be made through a breadboard.

An Arduino is not included. 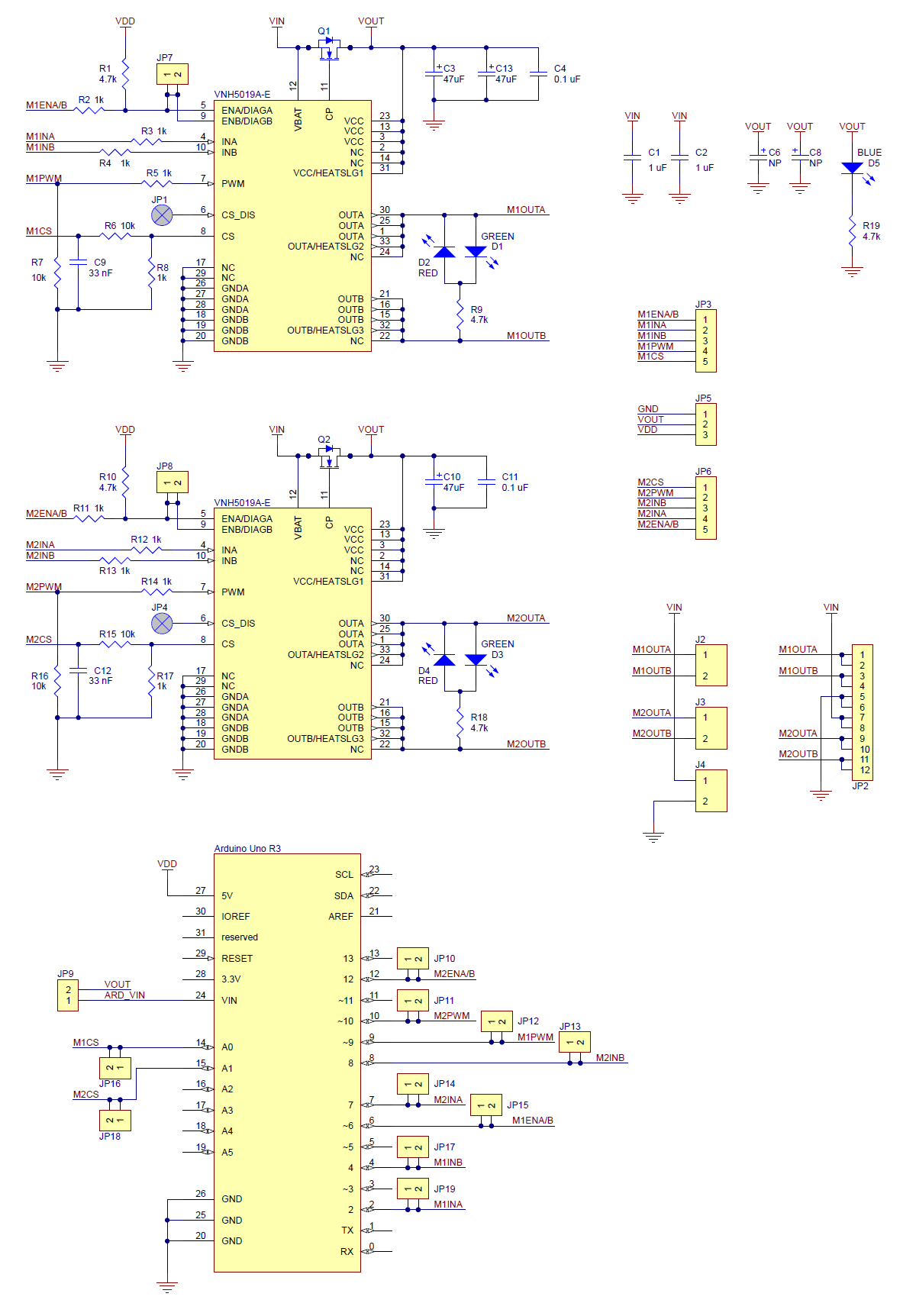 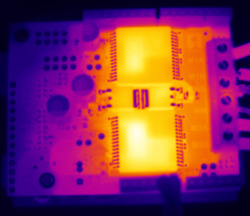 Thermal image of the top side of the dual VNH5019 motor driver shield during one of our current tests.

The current-related values in the table below (i.e. the entries to which footnote 3 applies) are the results of tests on only one or two of each driver version, so they do not capture potential unit-to-unit variation, and they were performed using the single driver versions, not the dual carriers. As such, the values should be treated as rough estimates of performance, not as performance guarantees. While these tests seem to indicate that the VNH2SP30 runs a bit cooler—and hence can deliver more continuous current—than the VNH5019, it is important to note that the three driver versions were tested at different times under potentially different conditions, so the results are not necessarily accurate indications of relative performance.

The following table offers a comparison of the single-carrier versions of all three drivers:

Each motor driver IC has a maximum continuous current rating of 30 A. However, the chips by themselves will overheat at lower currents (see the table above for typical values). The actual current you can deliver will depend on how well you can keep the motor drivers cool. The shield’s printed circuit board is designed to draw heat out of the motor driver chips, but performance can be improved by adding heat sinks. In our tests, we were able to deliver short durations (on the order of milliseconds) of 30 A and several seconds of 20 A without overheating. At 6 A, the chip gets just barely noticeably warm to the touch. For high-current installations, the motor and power supply wires should also be soldered directly instead of going through the supplied terminal blocks, which are rated for up to 16 A.

The voltages on the M1CS and M2CS pins are each approximately equal to 140 mV per amp of output current of the corresponding motor. The current sense readings are more accurate at higher currents. Note that the output is only active while the H-bridge is driving; it is inactive (low) when the driver is coasting (motor outputs are high impedance) or braking. During the coast portion of the drive/coast cycle, current will continue to circulate through the motor, but the voltage on the FB pin will not accurately reflect the motor current.

Note that while the M1CS and M2CS voltages can potentially exceed 3.3 V at high currents, the current sense circuit should be safe for use with many 3.3V analog inputs. Most MCUs have integrated protection diodes that will clamp the input voltage to a safe value, and since the CS circuit has a 10 kΩ resistor in series with the output, only a few hundred microamps at most will flow through that diode.

This newer version (ash02b) of our dual VNH5019 motor driver shield replaces the original version. The new version adds pass-throughs for the four new pins on the Arduino Uno R3. Generally speaking, most users should not notice any other differences between the two shield versions; details can be found in this section of the user’s guide. The easiest way to distinguish between the two versions is via the silkscreen in the top left corner, where the new version is labeled ash02b and the original version is labeled ash02a. 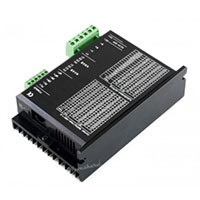 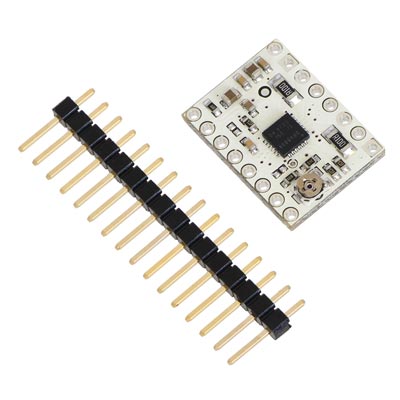 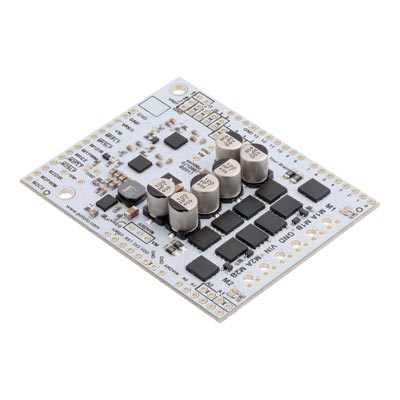 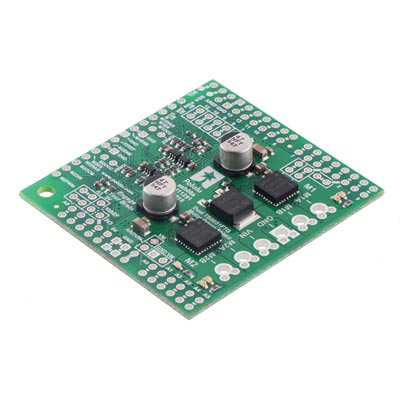 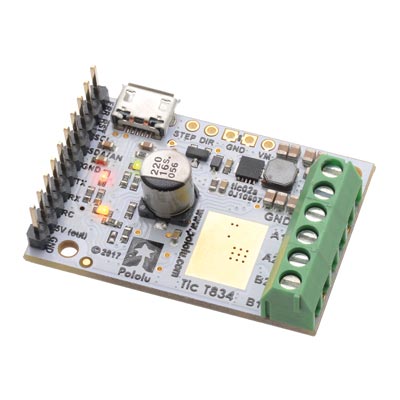