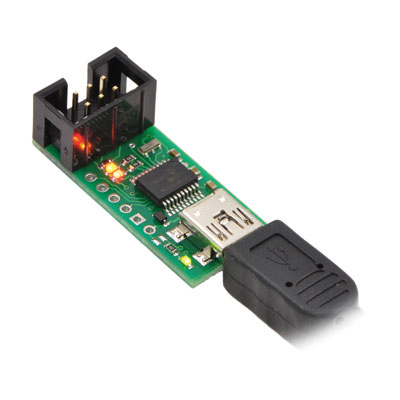 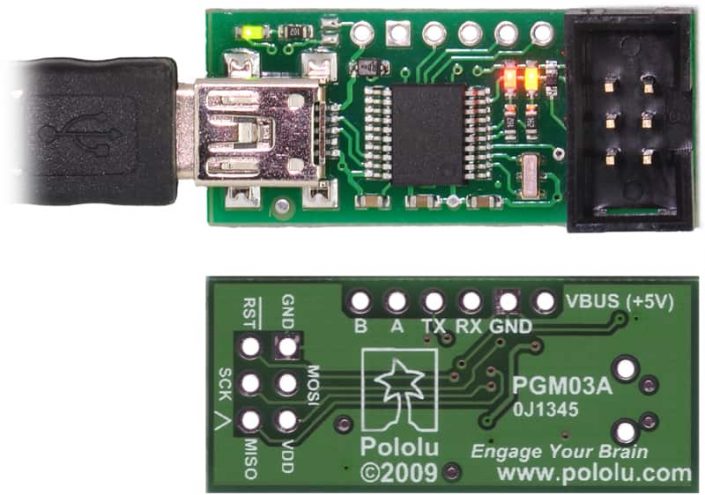 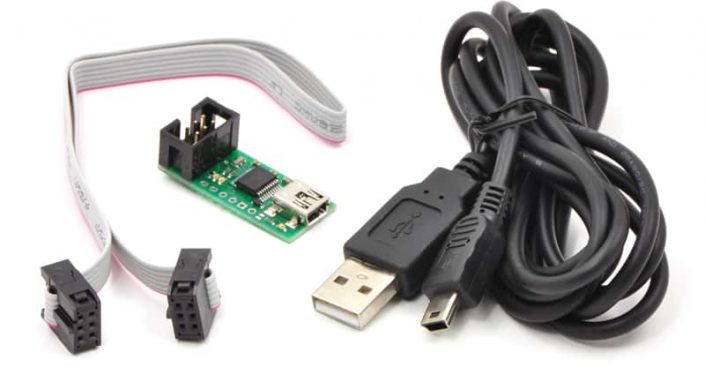 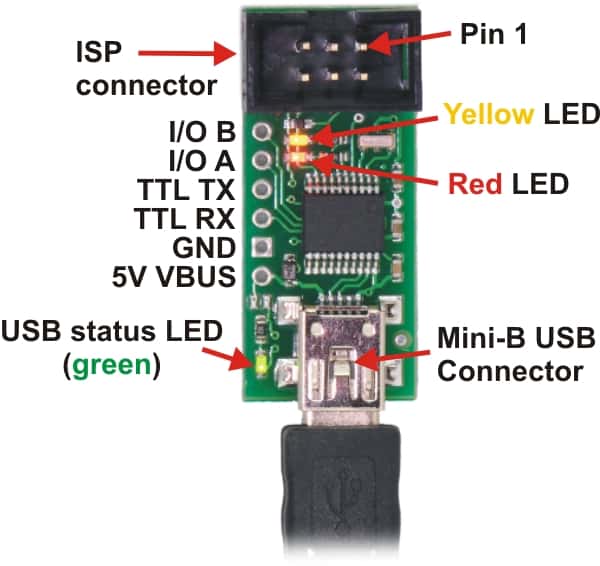 This device is a programmer for AVR-based controllers, such as our Orangutan robot controllers and the 3pi robot. The programmer emulates an STK500 on a virtual serial port, making it compatible with standard AVR programming software. Two additional features help with building and debugging projects: a TTL-level serial port for general-purpose communication and a SLO-scope for monitoring signals and voltage levels. A USB cable and ISP cable are included.

The Pololu USB AVR Programmer is an extremely compact, low-cost in-system programmer (ISP) for Atmel’s AVR mirocontrollers, which makes this device an attractive programming solution for AVR-based controllers like our Orangutan robot controllers and A-Star modules. The USB AVR programmer connects to your computer’s USB port via an included USB A to mini-B cable and communicates with your programming software, such as Atmel Studio or AVRDUDE, through a virtual COM port using the AVRISPV2/STK500 protocol. The programmer connects to your target device via an included 6-pin ISP programming cable (the older, 10-pin ISP connections are not directly supported, but it’s easy to create or purchase a 6-pin-to-10-pin ISP adapter).

The programmer is powered by the 5V USB power bus, and it is intended for programming AVRs that are running at close to 5 V (note that the programmer does not deliver power to the target device).

The programmer has been tested under Windows XP, Windows Vista, Windows 7, Windows 8, Windows 10, and Linux. We provide limited support for using this programmer on Mac OS X; please see the user’s guide for details. This programmer is not compatible with older versions of Windows.

The USB AVR programmer doubles as a USB-to-serial adapter. The programmer installs as two virtual COM ports: one for communicating with programming software and one for the general-purpose USB-to-serial adapter. This means that you can seamlessly switch between programming an AVR and debugging it through the TTL serial port without having to open and close your terminal program. In addition to the serial transmit (TX), and receive (RX), lines, the programmer lets you use pins A and B as serial handshaking lines. The programmer’s configuration utility allows you to select which handshaking line is assigned to which pin, and both input and output handshaking lines are supported. The programmer also gives you access to the USB’s regulated 5V power bus through the VBUS pin. The TTL-level serial port is not supported in Mac OS.

This device can also act as a two-channel, severely limited oscilloscope (SLO-scope) using the A and B pins as analog voltage inputs and the Pololu SLO-scope application for Windows. The SLO-scope can measure voltages between 0 and ~5 V (the maximum is limited by the USB bus voltage), or higher if you use an external voltage divider, and it supports two sampling modes: 10 kHz sampling of two 8-bit analog inputs or 20 kHz sampling of one 7-bit analog input and one digital input. This feature can help you debug your circuits and firmware by seeing what the voltages are doing at various nodes. (Please note that the SLO-scope feedback is quite limited and is not intended as a substitute for a real oscilloscope or a good multimeter, which will have much higher input impedance, better resolution and range, and higher sampling frequency.) The SLO-scope is not supported in Mac OS or Linux.

The Pololu USB AVR Programmer ships with a 12″ (30 cm) 6-pin ISP programming cable and a USB A to mini-B cable. It does not ship with software or documentation, but software (including drivers) and documentation can be found under the resources tab. 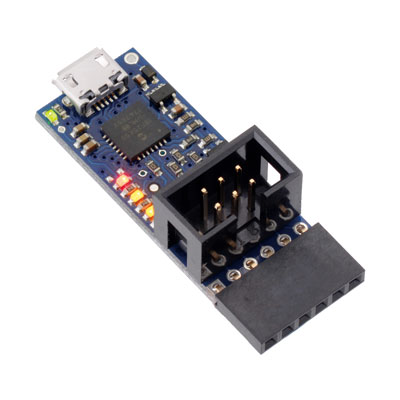